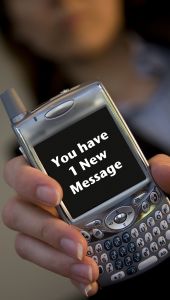 According to an article in the Chicago Tribune, North Carolina couples who are heading for divorce should be careful about texting because their heated words could be used against them later in court.

According to statistics from the American Academy of Matrimonial Lawyers (AAML), many top divorce attorneys say they’ve seen a spike in the number of cases using evidence from cellphone text messages over the past several years as the prevalence of smartphones increases exponentially.

The rise in text message evidence becoming a part of divorce cases follows a rise noticed a few years ago by the AAML relating to evidence from Facebook messages. “With emails you can think about and rewrite them. There is a window of opportunity to rethink what you are saying but text messaging is immediate,” said Ken Altshuler, the president of the AAML. “We get a lot of text messages that people send out without thinking.”

Altshuler described text messages as “spontaneous venting” that often come back to haunt people. They’re very easy to write and distribute quickly but the implications can be far longer lasting. Text messages on your phone seen by others can also be mentioned and brought into divorce proceedings. Altshuler said, “I have used text messaging for cross examination.” He continued by mentioning that he had also submitted texts as evidence. “I would say in the last six months there have been a lot of text messages involved in litigation. For whatever reason, people are texting more and not thinking about what they are texting.”

According to the AAML survey text messages were simply the most commonly used form of electronic evidence derived from cellphones. Other information taken from smartphones include emails, phone numbers, call histories, GPS and Internet search histories. As such, North Carolina couples need to be careful with what information they have sitting around that may later be used against them.

Altshuler believes that the reason for the surge in text evidence is that people have their guards down because they mistakenly believe texting is safe, all because the messages aren’t easily printed out. This is a false sense of security, as the recent poll shows. While text messages cannot easily be printed, it can be done.

Skilled North Carolina family law attorneys would recommend that clients also avoid using Facebook and other social media services as these too are frequent sources of embarrassing information. “Anything that is in writing, you have to assume that someday a judge is going to see it. So, if it is not something that you don’t want a judge to see, don’t write it down.”

If you find yourself facing divorce and are worried about your financial future, you need the help of an experienced Charlotte family law attorney who can help guide you through the complex process.