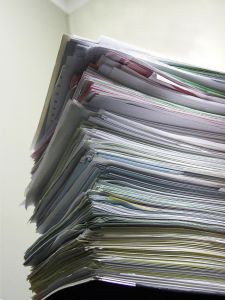 Many couples facing a divorce wonder why the time and expense associated with discovery is necessary. They figure that they know what the other spouse’s assets are; after all, you watched them buy the stuff in the first place. They think they understand the value of all the retirement and bank accounts because they’ve had conversations about them. Many people believe their spouse would not or could not hide any important information so why go through the trouble at all? The problem is, what you don’t know can hurt you in this instance, which is why the discovery process is so important.

Discovery is the legal process meant to extract information from the opposing party in a lawsuit. Gathering facts early on in litigation may actually help minimize costs in the long run by narrowing the issues that need to be addressed at trial or in settlement negotiations. Discovery involves numerous approaches, including: Interrogatories, Requests for Production of Documents, depositions (both written and oral), physical and mental examinations, Requests for Admission, and others. The most important and most commonly used discovery methods are Interrogatories, Requests for Production of Documents, and Requests for Admissions.

Requests for Production of Documents (RPDs) are exactly what they sound like. An attorney makes formal requests for documents in the other party’s possession. If the party refuses to release requested documents that can also lead to sanctions by the court. Unlike interrogatories, there is no limit to the number of requests that can be made.

Admissions are statements presented to the other party. The opposing party is asked to admit or deny the truth of certain matters. Admissions are very powerful and help attorneys narrow down the number of issues that are really in contention between the parties. Another important bit of information about Admissions are that if the other party does not answer a request in a timely manner, the request can be deemed admitted.

As was mentioned above, discovery, when done properly, can help to uncover hidden assets. Many people may think they know what their spouse owns and yet discovery can still reveal some hidden assets. Unfortunately, it’s also possible that discovery works the other way, revealing that the couple has less money than they thought. Either way, the process has worked. It’s critical that before the divorce proceeds your North Carolina family law attorney understands what is out there so he can properly craft a plan that is right for you.

If you find yourself facing the prospect of divorce in Charlotte, contact an experienced family law attorney in Charlotte, North Carolina like those at Arnold & Smith, PLLC (http://www.arnoldsmithlaw.com/lawyer-attorney-1760426.html) who can help guide you through the sometimes-confusing process.