A hostile divorce in Montana resulted in a man losing touch with his beloved bird, a macaw, for more than five years. Thankfully, the two were reunited recently thanks to a friend with a good eye.

The ordeal began when the man, Mike Taylor, and his wife went through an especially nasty divorce several years ago. In the divorce, Taylor’s wife won control over their pet bird, Love Love. After the settlement was done, his wife decided to sell the bird, devastating Taylor who had always been fond of his 25-year-old pet. 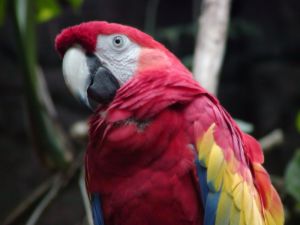 A friend of Taylor’s was recently visiting a bird sanctuary in the state when he thought one of the birds seemed oddly familiar. The friend had to cajole Taylor to come see for himself, but once he did he knew it was his Love Love. Taylor then had to try and convince the owner of the sanctuary to let him get his bird back, but after revealing several oddly specific facts about the bird, including his blindness in one eye, the owner decided Taylor was telling the truth.

The sanctuary initially took possession of Love Love after another woman sought to give the bird away after the bird bit her so hard that she required medical attention. Love Love has not been aggressive with Taylor and seems to have settled back into his old routines.

This was helped because, miraculously, Taylor was also able to find Love Love’s original cage from before the divorce. Apparently his ex-wife had stored the cage in a unit which she eventually lost due to unpaid bills. After hunting around online Taylor was able to locate the buyer of the storage unit who gave him the original bird cage for free.
Love Love is now happy in his new home with Taylor. Given the unusually long life expectancy of macaws, typically 50 years or more, Love Love can look forward to another 25 years with his rightful owner.

“Mont. man reunited with bird he lost in a divorce,” by The Associated Press, published at Yahoo.com.

The Truth Behind Several Common Divorce Myths :: Part II :: Family and Divorce Lawyers and Attorneys in Charlotte and Concord, NC