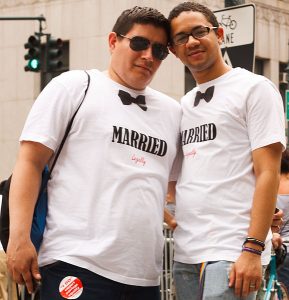 Since the U.S. Supreme Court recognized a constitutional right to gay marriage in Obergefell v. Hodges on June 26, 2015, the legal realm for many same-sex couples has continued to evolve as a layered patchwork of law and confusion.

It is true that on many fronts Obergefell simplified matters. California same-sex couples are familiar with this confusion, especially those who married after the state supreme court legalized gay marriage in June 2008.

Less than six (6) months later, voters passed Proposition 8. The state of California would continue to recognize a union, but the 1,000-plus legal rights that were given via marriage would not be achievable for other couples who wanted to marry in that state going forward.

Fast-forward to 2013, and same-sex marriage is back to being fully legal in California. Do you have whiplash yet?

Obergefell did put a stop to dizzying flip-flopping in the Golden State and elsewhere, and gave same-sex couples the right to marry in all 50 states. However, it is also true that the legal realm for same-sex couples remains complicated to this day.

Marriage creates a whole new set of rights and responsibilities that many couples pre-Obergefell were not allowed to realistically ponder: prenuptial agreements. Marital property. Spousal support and alimony. Adoption. Legal rights surrounding birth and death. Many of these areas remain uncharted territory for same-sex married couples.

The Obergefell case began when James Obergefell and his partner, John Arthur James, filed a lawsuit challenging Ohio’s refusal to recognize same-sex spouses on death certificates. The two had been legally married in Maryland in 2013, where gay marriage was legal at the time. Mr. Arthur James, suffering from a terminal illness, died shortly after the litigation began.

Considering that the seminal same-sex marriage case began specifically as a fight to include same-sex spouses on each other’s death certificates, it is ironic that these remain one of the largest unresolved issues post-Obergefell. Even after the U.S. Supreme Court ruling, Florida courts refused to issue death certificates with same-sex partners’ names on them. This can affect the partner’s ability to administer or receive their spouse’s estate and receive spousal survivorship rights for state pension plans and retirement benefits.

Although the issue of state records may seem like a mere administrative issue for some, they are often a hugely important issue from which the “presumption of parentage” is founded; in the majority of states, including North Carolina, the law presumes the birth mother and her husband to be a child’s legal parents.

In states like Massachusetts, California, and others, it is clear that the presumption of parentage applies to married same-sex couples. However, in places where state governments remain relatively hostile to same-sex marriage, officials are still, a year after Obergefell, refusing to apply the marital parentage presumption to same-sex couples. Arkansas, Florida, Indiana, and Wisconsin are among the states that have refused to issue birth certificates listing two males or two females as parents.

A description of Florida’s developing law on the issue demonstrates the problems state-level birth certificate laws and forms pose. Until this May, Florida refused to list both same-sex mothers as parents on their child’s birth certificate. The May edict from the Department of Health pushed the state’s birthing centers and hospitals to begin issuing birth certificates to married same-sex partners who gave birth to a child.

Even this development is only a partial solution. For starters, the phrasing of the order only addresses lesbian couples because one of them must have physically given birth to the child. Even then, the language on the birth certificates will still list one of them as the mother and the other as the father. Florida has said couples can request gender-neutral birth certificates “when they become available,” and has agreed to retroactively amend birth certificates to couples who were previously denied the right to have both parents listed, but the solution is still far short of the equality many imagined Obergefell would bring.

In the same way that the laws and forms of many states still presume that 1) married couples are heterosexual and 2) a woman’s spouse is the child’s other parent, birth certificates create their own rebuttable presumption of parentage under the law. Without being listed on the birth certificate, a parent can be prohibited from visiting the child at school, having custody rights in the event of divorce, or making medical decisions in the event of an emergency.

Even for same-sex couples who can get both spouses’ names on the birth certificates, Equality Florida and family law attorneys in the state have urged parents who receive an accurate birth certificate to still complete a second-or step-parent adoption or court order recognizing the non-birth mother as the parent, as it is the only way to ensure that they will be recognized as a parent if they travel or move outside of the state.

A discussion of birth certificates invariably leads to an analysis of the way the Obergefell ruling impacted (and hasn’t impacted) the rights of same-sex couples when it comes to issues like child custody and divorce. We’ll pick up next time and delve further into these issues.

One Year After Obergefell, Challenges Remain