At long last, Maria Mena has won in her quest for full custody of the child she had with New York and New Jersey bombing suspect Ahmed Rahami when they were teenagers. 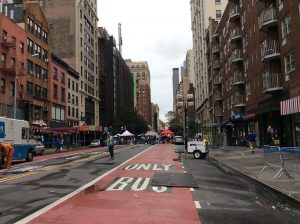 However, the judge denied Mena’s emergency request to change the child’s last name so that it was different from Rahami’s.

Before making the top of the country’s terrorist watch list, Rahami had violated a restraining order to not have contact with Mena and was behind on his child support payments to the tune of nearly $7,000.

The tipping point, however, came when Mena filed another request to change the existing shared custody order after the bombing incidents, citing Rahami’s potential terrorist activities as the basis for her petition. The court granted Mena temporary sole physical and legal custody of the child, convinced that continued shared custody posed a threat of irreparable harm to the minor. Mena told the court she was worried Rahami would try to indoctrinate their child with his views on radical Islam, and feared that he would try to kidnap the child from her.

Mena and Rahami reportedly dated in high school and had the child when they were teenagers. Despite the prior shared custody order, Mena told the court hearing her petition that she had not met with Rahami physically for some time or spoken to him since this January.

Rahami is reportedly still hospitalized in New Jersey after being injured in a shootout with police on September 19. Federal law enforcement indicated that he was still in no condition for a first appearance in court. He has been charged with both state and federal crimes, including bombing of a public place, use of weapons of mass destruction, and attempted murder of a law enforcement officer.

The judge’s custody decision is no shock to many, given the allegations and evidence against Rahami. In addition, a brief examination of the law makes the name change denial no more surprising.

State laws typically require that a nonconsenting parent at least receive notice of a petition to change a minor child’s name. In New Jersey, there is a presumption in favor of the primary caregiver’s choice of last name over the other parent’s objection when the child is born out of wedlock.

The New Jersey presumption is stronger than in many states where the consent of both parents is usually required. In North Carolina, for example, a child’s last name can be changed only if the noncustodial parent has abandoned the child or been convicted of (not just charged with) certain child abuse, sex offense or violent crimes.

The precise reason why the family court judge denied Mena’s emergency request for changing her child’s name is unclear, although presumably it was because Rahami could not adequately receive notice of the petition or object while in federal custody at the hospital. As of the time of this blog post, Rahami still reportedly had not even been appointed a federal public defender to represent him on his criminal charges. New Jersey follows the ubiquitous “best interests of the child” standard in family law matters involving minor children, but the judge apparently ascertained that sharing a last name with Rahami did not subject the child to irreparable harm for the time being.

The Implications of the Brangelina Split