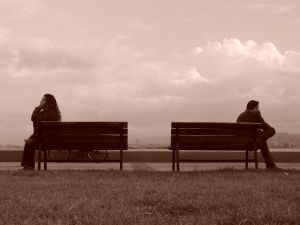 According to a recent Wall Street Journal article, as couples deal with the difficulties inherent in every relationship it is sometimes hard to know when a fight is just a fight or the beginning of the end.
According to research from the Gottman Institute, couples typically wait an average six years in a less-than-happy marriage before seeking help. Deciding whether and when to call it quits is an obviously difficult and sad process.

A new type of therapy, called “discernment counseling,” offers a new approach. Discernment counseling, pioneered by Bill Doherty, a professor in the family social science department at the University of Minnesota, sets out to help couples decide whether to divorce or remain married. Doherty thought up the idea after a local family court judge mentioned that he was surprised by the number of people divorcing that seemed to get along so well that he was confused why they were splitting up.

In a recent study of divorcing couples published in the Family Court Review, the results showed that about 30% of individuals who were divorcing said they would seriously consider a reconciliation service if it was offered by the court. Further exploration of the numbers showed that after comparing responses of both spouses, about 10% of couples had both partners interested in reconciliation.
Doherty has decided that in 30% of couples headed for divorce one spouse is what is described as “leaning out,” or wanting to go, while the other is “leaning in,” or wanting to stay. In discernment counseling, he helps the leaning-out spouse decide if leaving is the best answer and helps the leaning-in spouse cope with the final decision without worsening the situation. After working through their issues, he lays out three alternatives: marriage as it has been, divorce, or a six-month reconciliation with marriage therapy. Of the 25 couples that have gone through the process 40% decided to try the reconciliation.

If you’re debating ending your marriage, therapists offer the following advice on how to do so in the least damaging way:

• Look to the future. Talk to a lawyer and an accountant, research where you’d live and the price you’d pay. You’ll either be excited or depressed and that will tell you a lot.

• Tell your spouse early on. As soon as you begin to waiver tell your partners. Bring up the problem when you still want to stay married.

• Try out therapy. If you think your marriage could be saved give it a try, usually for six months or a year.

• Expect the worst. Anticipate that your spouse will be mad and behave badly. No matter what the reaction is listen and have a conversation, allowing your significant other to respond with their thoughts.

• Stick around. Even if you’re the one leaving therapists suggest staying around for a transition period if your spouse has requested it, easing the shock.

If you find yourself facing the prospect of divorce, then you need the help of an experienced family law attorney in Charlotte, North Carolina who can help guide you through the difficult process.

Use Caution in Post-Divorce Dating