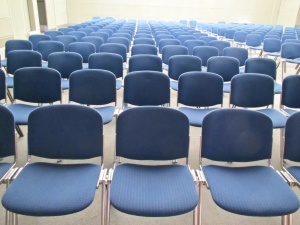 According to a recent CNBC article, a divorce expo called “Start Over Smart,” took place in New York over the weekend and was much like a bridal expo, only with lawyers instead of white gowns.

The expo was the idea of Francine Baras and Nicole Baras Feuer, a mother-daughter team who have both been through the painful process. “Bridal magazines are all over the place. There’s no divorce magazine, no divorce community, so a lot of people just rely on information from their attorney,” said Baras Feuer. The mother-daughter duo heard about a similar expo in Paris and decided to try their hand at one closer to home.

The divorce expo was a two-day extravaganza that included a wide variety of panel discussions, from guidelines for parents and divorce for Baby Boomers to how to get back in the dating game after divorce.

Approximately 40 exhibitors set up shop and included lawyers, financial advisers, therapists, life coaches, dieticians, anti-aging companies, a hair stylist and even a matchmaker. Major wealth management firm Morgan Stanley was represented as was a woman who offered to perform a “divorce ceremony” where you write words that remind you of your former spouse and set them on fire. “People often don’t know the questions to ask about finances when they get a divorce,” said Mark Seruya, financial advisor with Morgan Stanley. “People wind up getting referrals from parents or friends. Your father’s financial adviser might not be the right fit,” he said. “It’s a fragmented market. We want to be one of the go-to teams in the divorce industry.”

The event was such a hit that the planners say they hope to replicate it in other cities. DivorceCon, coming to a city near you.

If you find yourself facing the prospect of divorce, you need to contact an experienced child custody lawyer in Charlotte, North Carolina who can help guide you through the confusing process.