When Derek Morris was a teenager, he was severely injured in a car wreck and received a large personal injury settlement. The money from that settlement was put into a trust in Derek’s name, with his mother Martha listed as trustee. 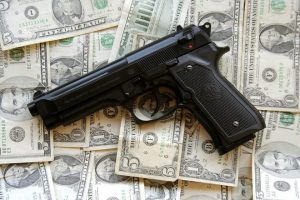 Bear with us on the details—one murder-suicide later, they will be important. The trust stipulated that if Derek died without a will, the remaining funds in the trust account would be transferred either to his descendants or, if he had none, to his siblings.

Six (6) years later, in 2004, Derek married a woman named Sarah in Atlanta. Later that year, the Morrises had a daughter, Iza Lily, and moved to Winston Salem, North Carolina. They lived there as a family for several years until the marriage began to deteriorate. By 2011, Sarah had moved back to Georgia and was living with family there, traveling back and forth to North Carolina to see their daughter.

On November 10 of that year, when Sarah was back in Georgia, the unthinkable happened; Derek Morris went into his sleeping daughter’s bedroom, shot her twice in the head, and then killed himself.

The tragic murder-suicide shook the North Carolina community. It also left family members and the local courts with the question of what to do with the money in trust that Derek had left behind. He hadn’t left a will, and the trust assets were now worth more than $2.2 million.

The trust was not part of Derek’s probate estate, meaning that it was not subject to distribution upon his death with the rest of his estate. Normally, this would have been the end of the story. However, Sarah filed a wrongful death suit on behalf of her slain daughter. The court awarded her a $10 million default judgement against her deceased husband’s estate.

In order to collect on the $10 million awarded for her daughter’s murder, Sarah would have to go after the trust.

Meanwhile, further complicating matters, Martha, Derek’s mother, had filed a petition in the Georgia courts. She asked for a declaratory judgment that the trust funds be distributed to Derek’s siblings, not his widow, because his only descendant (Iza Lily) had predeceased him.

If this scenario seems unfair to you, you’re not alone. The North Carolina legislature has had a law on the books since 1961 that strips a person who kills another, and the killer’s estate, of all related inheritance rights. This so-called “Slayer Statute” makes it so that a person cannot, for example, kill their spouse and then inherit from the deceased spouse.

Within the context of this case, the law meant that a North Carolina court would view Derek to have predeceased Iza Lily. If the court viewed Derek as dying before Iza Lily, then Iza Lily (or her mother/estate in this case) would be entitled to inherit from the trust.

Georgia has a “Slayer Statute” as well, but the way it is written meant a court there still viewed Iza Lily as dying before Derek.

North Carolina’s law contains a specific provision that if the victim dies with no living descendants, the property the slayer would have inherited from their victim will be distributed as though the slayer predeceased the victim. Georgia’s does not.

Derek’s family and widow ended up battling the issue of which state law to apply up to the Georgia Court of Appeals. His family argued that Georgia law should apply because the trust was created and administered in that state. Sarah, meanwhile, argued that North Carolina has a significant interest in crimes committed by and on its residents within its borders.

In the end, the court of appeals sided with Derek’s family. Tragic although the outcome may have been in this particular instance, the court said Georgia law had the most significant relationship to the trust and should apply. It would have gone against the public policy of judicial predictability for the court to have made an exception and applied North Carolina law contrary to what the trust specified.

Is A Religious Deathbed Marriage Valid for Estate Planning Purposes?

Can I Leave Assets to My Pet in My Will?