Charlotte Divorce Attorney Matthew R. Arnold of Arnold & Smith, PLLC answers the question ” Is there some property that the judge cannot divide?”

The split between New York media executive Noah Szubski from the daughter of “Wild Wild West” star Robert Conrad is heating up, with Szubski and Chelsea Conrad waging a courtroom battle over Cash. 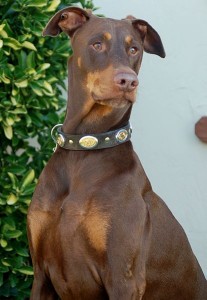 Cold hard cash is not the issue, however, and the split is not quite a divorce, since Szubski and Conrad were not married. The issue between the couple is custody of Cash—their beloved Doberman Pinscher.

Szubski and Conrad broke off their romantic relationship last October, and Conrad moved into a separate apartment not far from Szubski’s townhouse. When she did, she left the 85-pound dog with Szubski, but he allowed Conrad to visit the dog, take it for walks and to care for it when he was out of town.

That all changed—or as Manhattan Supreme Court Justice Geoffrey Wright wrote, “The cordiality of the separation was sundered on Valentine’s Day 2015”—when Conrad showed up at Szubski’s pad to take Cash on a walk and found Szubski with three women.

Conrad took Cash on the walk but never brought the dog back. Apparently Conrad’s mother—Lavelda, then visiting from California—convinced Conrad to keep the dog.

Szubski brought an emergency legal action seeking return of the dog. In a court proceeding last week, Conrad testified that she had always intended for Cash to live with her full time, but she had acceded to Szubski’s desire to have the dog stay with him because she was fearful of his temper.

Justice Wright said he did not believe Conrad, according to the New York Daily News. He noted that Cash has lived the majority of his life with Szubski, that Szubski has paid all of the dog’s expenses, and that Szubski even bought a French Bulldog (named Bernie) to keep Cash company.

Szubski’s petition for emergency relief was granted, and Conrad was ordered to meet Szubski on West 22nd Street—near where both Szubski and Conrad live—to return the dog. Szubski was reunited with Cash last Friday.

The matter did not end there, however; a full hearing on the issue of permanent custody is set for April 3. Mia Poppe—Conrad’s lawyer—said Szubski’s case for custody of Cash is weak because Conrad never gave him the dog.

Furthermore, Poppe told the New York Daily News—while courts have decided custody issues of pets in divorce actions, there is no legal precedent for a court to decide “who is able to keep personal property—including animals” in a boyfriend-girlfriend breakup.

Marriage is for the dogs, the goats, and cardboard cutouts of Robert Pattinson