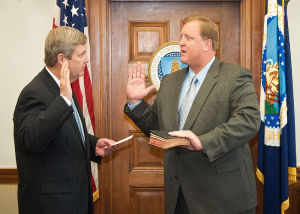 The unwinding of Vines’ post-perjury life did not end with criminal charges, however. In January, one Lafayette city council member asked that Vines be suspended without pay, but the motion died for lack of a second, according to WVTM-TV.

Then, at a February 9 city council meeting, Lafayette Mayor Barry Moody announced that Vines would be retiring from the police force. Mayor Moody revealed that Vines had been “fined for perjury and presenting false documents during his divorce proceedings,” according to the Lafayette Sun.

Vines had initially planned to retire on April 1, but after the grand-jury indictment and guilty plea, Vines decided to step down immediately.

For Vines, it was the end of a 30-year law-enforcement career. He said his successor would “maintain high levels of integrity and professionalism and… build on the foundations… set during” Vines’ tenure.

It may seem astounding, to the casual observer, that an individual in Vines’ position—who likely dealt with the court system on a day-to-day basis and was accustomed to giving and being involved in the administration of sworn statements—evinced such a casual disregard for truth.

The pressures of the divorce process, however, can cause the vagaries of human nature—even if only for a moment—to rise to the surface.

The pressure to win at all costs must be resisted, especially when it means not telling the truth.