A 40-year veteran of the Asheville Citizen-Times says gay weddings would mean big business to Asheville. The only thing standing in the way is North Carolina law. 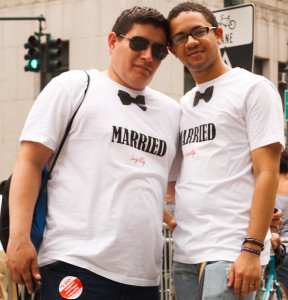 Dozens of scenarios could play out, “depending on decisions made at almost every legal level, from the state attorney general to the General Assembly to the Supreme Court,” wrote reporter Barbara Blake in an Aug. 3 article. She cited a July 28 ruling by the 4th Circuit Court of Appeals striking down Virginia’s same-sex marriage ban and wrote that the way was paved for North Carolina courts to do the same.

That may be wishful thinking on the part of Blake and advocates of same-sex marriage. But as Blake points out, more than a few businesses may stand to benefit from a change in the law.

Asheville is already a destination for marriages and marriage celebrations and is considered a “gay-friendly city,” Blake wrote. Most business owners quoted in Blake’s story said they were open to all couples, and did not market themselves specifically to gay couples. The owners of one event-planning and floral design company—life partners Bobby Hill and Mark Arrington—said “the prospect of a new population of brides and grooms is exciting.” They conceded, however, that they had no plans to advertise specifically to the “gay market.”

A change in the law may change their strategy, however. If same-sex marriage became legal in North Carolina, Hill said, his company—called BobbyMark’s Designs—may ramp up outreach by adding key words such as “commitment ceremony” and “gay weddings” to the company’s website.

Becca Knuth, an owner of Asheville Event Co., said traditional weddings have already “gone out the window,” and that “anything goes, and that’s what makes a wedding special and unique in this day and age.” Hill added that legal same-sex marriage will accelerate a growth pattern away from traditional weddings that began a long time ago. “It’s going to be challenging for some people in the industry,” he said.

Wedding photographer Terry Hastings said there was definitely an upswing in weddings—especially gay weddings—in Palm Springs, California after the U.S. Supreme Court struck down that state’s Defense of Marriage Act, effectively allowing same-sex marriages to resume. A Washington state-based event planner with a satellite office in Palm Springs said she planned to move her company to Palm Springs because business had become so brisk. Within two days of the Supreme Court ruling, she said, she started getting calls to help gay couples. A local florist who said he does 80-percent of weddings in and around Palm Springs said business had doubled since the ruling. Most of the weddings, business owners told The Desert Sun, were “destination weddings” that attract couples and guests from outside the area.

That is exactly what Blake and advocates hope happens in Asheville and elsewhere in North Carolina. For now, however, all event planners and business owners can do is watch with interest as advocates fight to change North Carolina’s definition of marriage and while defenders of traditional marriage fight to strengthen and preserve the institution of marriage for future generations.