When Lebron James announced on live television that he was taking his talents to South Beach, he set off a very public and very intense public firestorm. Cleveland Cavaliers fans burned James’ Cavaliers jersey in the street. Some said if he ever wanted to come back, they wouldn’t take him. It looked to be a very messy and very public divorce. 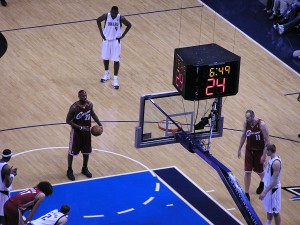 LeBron kicked off his Miami campaign during the “Recovery Summer” with an announcement that he planned to bring as many as eight NBA titles back to South Beach. That was oh-so 2010.

The Heat teams led by LeBron were upset by the Dallas Mavericks in the 2011 finals, then won back-to-back titles in 2012 and 2013—true to the form—before being trounced by the San Antonio Spurs in 2014.

Maybe it was that trouncing, or maybe it was wistfulness—a sense of missing the region of his birth coupled with a feeling that he’d left things unfinished in Cleveland—that made LeBron reverse course and return home.

First he had to meet Gilbert, the Cavaliers’ owner. The two had not spoken since LeBron’s departure and Gilbert’s letter. As Gilbert prepared to meet LeBron in secret, a week before LeBron announced he was returning, he said he felt like “every guy seeing his ex-wife after the divorce.” In the end, he said, he felt like a marriage that had been good for years was ruined by one bad night. Whether LeBron was returning or not, Gilbert said, he wanted to clear the air. He wanted to apologize.

To his surprise, LeBron felt the same way. He too wanted to apologize for his actions, for the way he left, for the way he had arranged things. With the past behind them, now they both could look to the future—they could work together to bring the Cavaliers’ first NBA championship home to Cleveland.

Human relationships—within and outside of the NBA—can be tenuous and complicated. Few if any feature as much at stake as the relationship called marriage. Many end messily—as LeBron’s first tenure did in Cleveland—many trail on gracefully, seemingly without end. A few end and, after a time, begin again.

A California State University Professor studied 1,001 couples around the world who had reunited after divorcing. Her study showed that just six-percent of couples married, divorced and remarried the same person. Most couples who reunited—72-percent—stayed together. The reason? The researcher chalked it up to better communication.

Couples that have put each other through the proverbial ringer of divorce but somehow come out on the other side without harboring a lifetime of animosity tend to be more self-reflective, open to communication and hesitant to assign blame. These are qualities that can benefit couples in any relationship, not just those enjoying their second go-round.

Divorce Advice for Befriending your Ex

After a Divorce in Charlotte, North Carolina