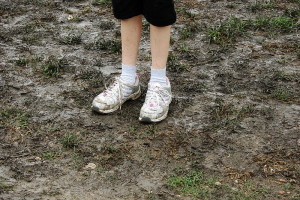 Naugler’s brand of off-the-grid daily living and raising children has raised more than eyebrows in Breckenridge County. Naugler’s ten children were seized by Child Protective Services last week, according to the Daily Mail, after investigators found that the family was living in a tent, that Nicole Naugler—Joe Naugler’s pregnant wife and the mother of their ten children—had given birth in a tent, that the homestead had no running water or septic system, and that none of the Naugler children were enrolled in school.

Appearing in court to seek to regain custody of the children, Joe Naugler said that the children are homeschooled and that they are “at liberty to go or do what they want on their land,” according to the Daily Mail. That land—Child Protective Services officials allege–contains “numerous piles of garbage, broken glass and nails… scattered about the property…” and a pond with “no barrier around it to prevent the children from entering or falling in.” The Naugler children range in age from five to seventeen years.

Naugler’s nineteen-year-old estranged son appeared at the custody hearing on Monday and accused Joe Naugler of physical, sexual and mental abuse. The now adult son said he had not seen his father in nearly fifteen years, as he was removed from Joe Naugler’s custody when the boy was just four-and-a-half years old. “We had a very dysfunctional relationship,” he told the court.

The Naugler’s updated their “Blessed Little Homestead” page on social media site Facebook following the hearing, reporting that the judge ruled that their children would remain in the custody of Child Protective Services while the investigation into their free-range parenting continues.

The Nauglers say they are seeking to live “a simple, back to basics life,” and that they have been targeted by local authorities who disagree with their approach to parenting. They contend that Breckenridge County Sheriff Todd Pate and other officers entered their property without a warrant or probable cause, seized the couple’s children and arrested the Nauglers. Officers visited the property to conduct a welfare check, according to media reports.

Nicole Naugler was charged with disorderly conduct and resisting arrest after fleeing when Sheriff Pate and another deputy arrived at the Naugler’s property, officials have alleged. Nicole Naugler said she was trying to protect her children from the officers and that she was slammed belly-first against a police cruiser after being pulled over.

Joe Naugler, meanwhile, was charged with misdemeanor “menacing.” The menacing charge stemmed from a confrontation over water involving Naugler and a deputy, according to WBKO. The Nauglers were due to be arraigned on criminal charges on Tuesday.