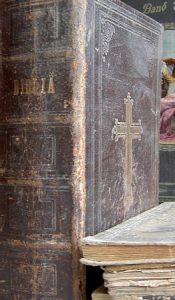 An example of this is a case in Knoxville, TN involving a custody dispute between two women in the midst of divorcing. The issue involves interpreting a state law about whether “husband” and “wife” should be taken literally or applied instead to same-sex marriages.

In the Knoxville case, Sabrina and Erica Witt had a child through artificial insemination and were legally married in D.C. The couple lived in Tennessee and, thanks to Obergefell, the state was forced to recognize the validity of their marriage. However, there is no similar Supreme Court case requiring recognition of both the women’s parental rights.

A judge in Knoxville ruled earlier this year that Erica has no legal parental rights under state law and thus could not be awarded visitation or other rights over her daughter. The judge based his decision on a strict reading of state law and said that Tennessee’s adoption statute does not envision or apply to a situation involving two parents of the same gender. The decision prompted an outcry from many who believe the woman, who acted as a mother to the child, was being denied a right she would otherwise be entitled to if she simply relocated to a different state where gay adoptions were legally recognized. Others praised the decision, saying that relevant statute only speaks to “husbands” of the birth mother, and was never intended to apply to a same-sex spouse of the birth mother.

Erica Witt has said she intends to appeal the ruling and a state court is currently debating whether to hear the case. The fight appears to be intensifying, as dozens of legislators have joined a conservative Christian group in attempting to intervene in the case. Fifty-three legislators, to be precise, have signed on to a motion put forward by the Family Action Council of Tennessee (“FACT”) arguing that an important legislative power will be impaired if courts are permitted to interpret the state law more broadly, thus allowing same-sex spouses to assert parental rights.

The legislators and FACT argue that family law matters have historically been determined by states. If the courts reinterpret Tennessee’s law more broadly, based on the Supreme Court decision in Obergefell, they argue that federal judges will have usurped the rightful power of state lawmakers. In unrelated cases, FACT has filed suit to invalidated two same-sex marriages performed in Tennessee. So far a judge has dismissed one suit, pointing out that FACT has no legal standing to bring such a case. The other case remains pending.

Matters of Life and Death: After Obergefell