What factors lead to divorce? It could be problems communicating, a lack of money, an abundance of money, disagreements about children, about in-laws, about chores, about infidelity. Working too much or too little is also a common issue in the demise of a relationship. There are too many to name and each divorce involves factors unique to that marriage. That said, it appears that what a person does for a living might be one (of a multitude) of things that can make it more or less likely that he or she eventually divorces. 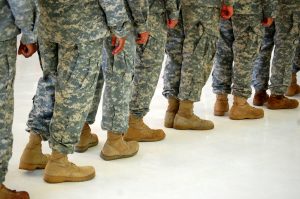 First, we should start by making clear that divorce can impact anyone in any industry. High income earners, low income earners and no income earners all divorce. People with busy jobs, people with easy jobs can all suffer from marital problems that ultimately are not able to fixed. In the end, no one is immune.

That said, recently released data based on the U.S. Census came to some interesting conclusions about what fields see the highest overall instances of divorce and what factors contribute to the increased rates of divorce. What group had the highest rate of divorce? First-line enlisted members of the military, specifically, those in supervisory roles. These people are involved in leading operations around the world and coordinating the actions of lower-level enlisted men and women. The stressful jobs can wreak havoc on marriages, leading to a 30% divorce rate by the time individuals reach the age of 30.

Beyond the military supervisors, other military jobs were found to occupy three of the top 10 spots for highest rate of divorce before 30. These include unranked military members and tactical military personnel. Overall, careers in the military were substantially more likely to lead to divorce than other industries, according to the data reported by Zippia. The study found that 15% of military marriages end in divorce by 30, almost twice the rate of the second highest profession (repair and maintenance).

So what’s the reason for the bad showing for military marriages? Researchers believe there are a number of factors that contribute. First, military jobs are notoriously stressful. This stress can prove difficult for the person working the job, but also for his or her family. Secondly, the stress can be magnified for those in active service in a war zone and manifest itself in the form of PTSD or depression, two things that can also make maintaining a marriage more difficult. Another issue is money, with members of the military frequently making do with less money than those in other, higher paying careers.

Enlisted men and women also face trouble because of frequent deployments and dislocations. Spouses have to pick up their lives and reintegrate in new communities on a regular basis, adding strain to an already difficult situation. Being away from one another for long stretches is also a risk factor for divorce. A separate study concluded that long deployments act as shocks to military marriages and that the risk of divorce increased each month that a deployment lasted. This is especially true in cases where a female service member is deployed to a combat zone. When that happens, there is a 50% chance that the woman will experience divorce during the first five years of marriage.

Though these factors all explain why military divorce is common, they also shed light on the factors that contribute to divorce for any couple. Things like stress, mental illness, low pay, time apart and frequent moves can and do add stress to any marriage, regardless of the person’s profession. When that stress gets to be too much, divorce, unfortunately, can be the result.

The Service (of Process) Issue: Divorce in Military Families