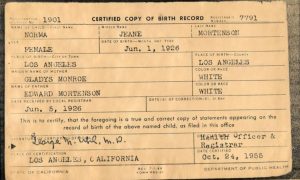 It’s a nuanced change, to be sure. North Carolina actually changed their birth certificate policies a month before the U.S. Supreme Court legalized gay marriage in all 50 states last year. The 2015 policy change, applauded by the ACLU, allowed the same-sex spouse of a woman who gives birth to a child during the marriage to be listed as the child’s other parent on the birth certificate.

However, what the 2015 change did not address was the fact that many families, including Meredith and Melissa Weiss, already had children born into a same-sex marriage before the change went into effect. For lesbian married couples going forward, the change was great, but families like the Weisses were not allowed to retroactively amend their children’s birth certificates to reflect both parents’ names.

Earlier this year we wrote on this blog about the evolution of family law for same-sex couples since the U.S. Supreme Court legalized gay marriage in Obergefell v. Hodges in 2015. Despite the profound and long-awaited decision Obergefell represented for marriage rights, what has remained is a patchwork of laws that still affect the rights of same-sex couples to adopt and have biological children of their own, amongst other family law rights. And the Weisses’ case is a perfect example of the legally confused limbo many have been left in.

After several years together, Meredith and Melissa Weiss traveled to Canada to get married in 2003. Melissa gave birth to the couple’s two children, both conceived via in vitro fertilization. They used Meredith’s eggs for their older son, Melissa’s for the younger.

Before their older son was born in 2006, the Weisses succeeded in their attempts to obtain a court order recognizing both women as the child’s parents.

The state would then require them each to go to court to adopt the child whose birth certificate they were not on. Even then, however, the Weisses ran into problems by not having both names on their children’s birth certificates, which are required by schools, state agencies that enroll children in insurance and other benefit programs, and government offices that issue documents such as Social Security cards and passports.

In October of 2014, four (4) days after a federal court acknowledged that North Carolina’s then-current same-sex marriage ban was illegal, the Weisses requested new birth certificates from the state that would list both mothers as the boys’ parents. They provided DHHS with the court orders recognizing them both as each son’s parents along with proof of their 2003 marriage.

After DHHS had not responded to these requests for over a year, Lambda Legal sued on the Weisses’ behalf.

The change does not affect same-sex male couples using in vitro and surrogacy to grow their families; married male couples must still follow the state’s separate procedures that apply to children born through surrogacy arrangements (hopefully after consulting with an attorney experienced with surrogacy laws and same-sex family law issues).