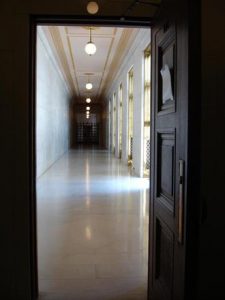 So if court isn’t quite what you think, what is it like? To find out what does and doesn’t happen if your divorce makes its way to a courtroom, keep reading.

Here’s a perfect example of Hollywood leading ordinary people astray. Unlike the eccentrics on TV who flout the rules without consequence, those who are in real courtrooms need to understand and abide by a number of rules. There are rules regarding your conduct, there are rules about who can speak when, about how evidence is admitted, about when to approach the judge, about how to ask questions, about how to answer questions. There are filing rules and timing rules and a lot of other unwritten rules, implied rules concerning dress codes and decorum. Navigating the rules can be very difficult, which is why it’s important to rely on an experienced North Carolina family law attorney who has been down the road many times before. Though wild displays may look good on film, they seldom end well in reality.

This can be the most shocking discovery of all. We expect that a divorce trial will allow us to air all our dirty laundry, putting our spouse’s wrongdoing on display for the world to see. The shame of his or her misdeeds will be immediately evident to the judge and we’ll be crowned victorious. Not so much. The reality is that except for extraordinarily bad behavior, spousal misconduct seldom gets included in a divorce case. A trial isn’t the time to bring up every instance where your husband or wife was rude or cold or dishonest. Though you may have a laundry list of examples of less-than-stellar behavior, chances are your spouse does too and the judge won’t be interested in hearing either. Unless the spousal misconduct was truly egregious (domestic violence, addiction, flagrant infidelity) and has a legal significance, it likely won’t get much attention in the courtroom.

Something that many people don’t realize is that divorce cases are almost always decided by judges, not juries. Though we’re used to seeing television lawyers plead their case to the wavering jurors, in reality, when a divorce case is being tried, the judge is speaking solely to the family law judge. In North Carolina, there are some very limited circumstances in which a jury can be involved. If there’s an allegation concerning alienation of affection, a party can ask that the jury decide that specific issue. Additionally, if it’s a case involving alimony and one party has alleged the other engaged in marital misconduct (meaning an affair), they can ask that the jury decide that issue. Again, the jury will be limited only to determining marital misconduct and won’t be able to decide how much alimony is awarded or for how long. Juries are absolutely prohibited from deciding anything to do with child custody, child support or equitable division. Those issues are left entirely for the judge.