Congressman Alan Grayson’s war on one woman has taken an ugly turn, with Grayson’s attorney slamming his estranged wife as being a “poor housekeeper” for allowing the condition of the Florida Democrat’s 5,300 square-foot home to become “horrible.” 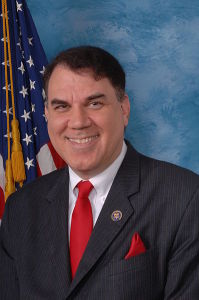 Grayson, the United States Representative for Florida’s 9th District, has “called out” Republican political opponents for waging a war “against all of the women in this country.” According to Grayson, the gullible, Confederate flag-waving bigots in the Grand Old Party oppose so-called “equal pay” laws and abortion, and that means they are in a war against women.

That imagined war has become all-too-real for Lolita Grayson, Rep. Grayson’s estranged wife. She claims that Rep. Grayson has failed to pay for repairs and upkeep on the Orlando home she shares with the couple’s four children. Mrs. Grayson alleges in court filings that the home’s roof is leaking, and broken windows are allowing rainwater to penetrate the interior of the home, which has led to a significant mold problem.

An annulment, like a divorce, dissolves a marriage, however an annulment treats a marriage as if it never occurred. Annulments can be obtained where one spouse was induced to marry through fraud or the concealment of facts that, if known, would have caused the marriage to have never been consummated in the first place.

Rep. Grayson has also brought claims of defamation, libel, slander and abuse of process against Lolita Grayson. These legal actions stem from a March incident in which Lolita Grayson accused the congressman of pushing her “very hard” against a door. Rep. Grayson produced cell phone video that, he claimed, showed Lolita Grayson escalated the fight.

Rep. Grayson has sought custody of the couple’s children and an order requiring his wife to repay him for all the money and property she has received during their “purported” marriage. He has also asked the court for exclusive use of the family home as well as their 1981 DeLorean. DeLoreans are well-known luxury vehicles. Marty McFly—Michael J. Fox’s character in the 1985 blockbuster film Back to the Future—famously used a DeLorean to engage in time travel.

Rep. Grayson’s bigamy allegations have ground the Grayson divorce proceedings to a halt. Before the divorce case can proceed, the court must determine whether Lolita Grayson was married at the time she married Rep. Grayson. If she was, Rep. Grayson may succeed in obtaining an annulment.

Bigamy—the act of being married to more than one person at a time—is considered a crime in most states. An Old Fort, North Carolina woman was arrested and charged with felony bigamy and perjury in September because, investigators said, she was married to three men at the same time.